A November visit to Magruder’s Landing on the Patuxent River…with a glimpse of Anchovie Hills.

Thanks to the current owner and her family, the remaining 171 acres of Anchovie Hills are permanently protected from development. Its wild residents are further protected from hunting and trapping.

Please remember that Anchovie Hills remains a private home and there is no public access. Respect the privacy of those who have ensured the permanent protection of this beautiful and historic site! Click here to see more about the Anchovie Hills Wildlife Sanctuary, including a short video of the property. 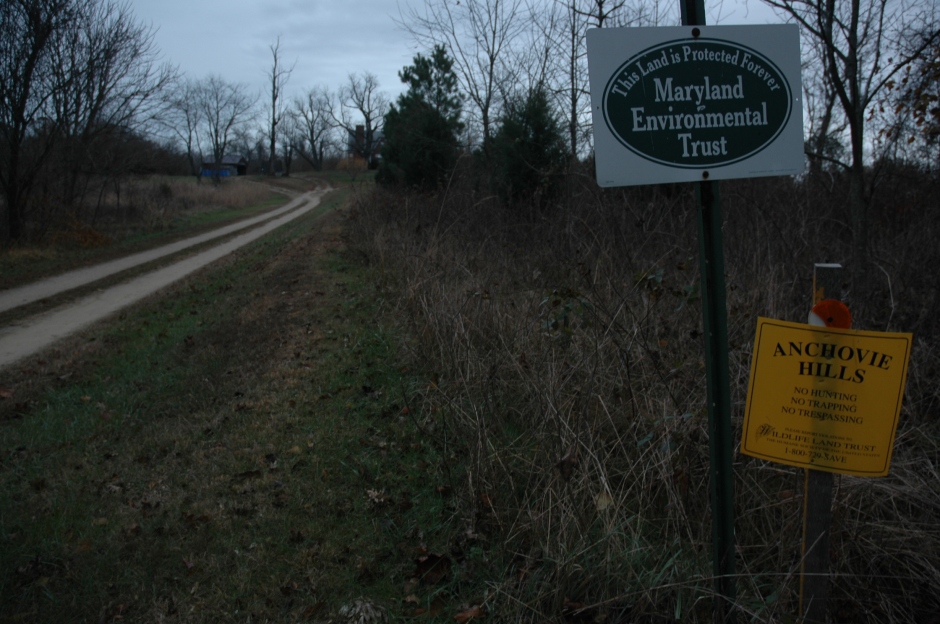 Anchovie Hills entrance on Croom Road, signs from the two land trusts that protect it from development. Photo: Margaret Yocom, 2013.

To reach the site of Magruder’s Landing, and the present-day boat ramp, turn down Magruder’s Ferry Road. 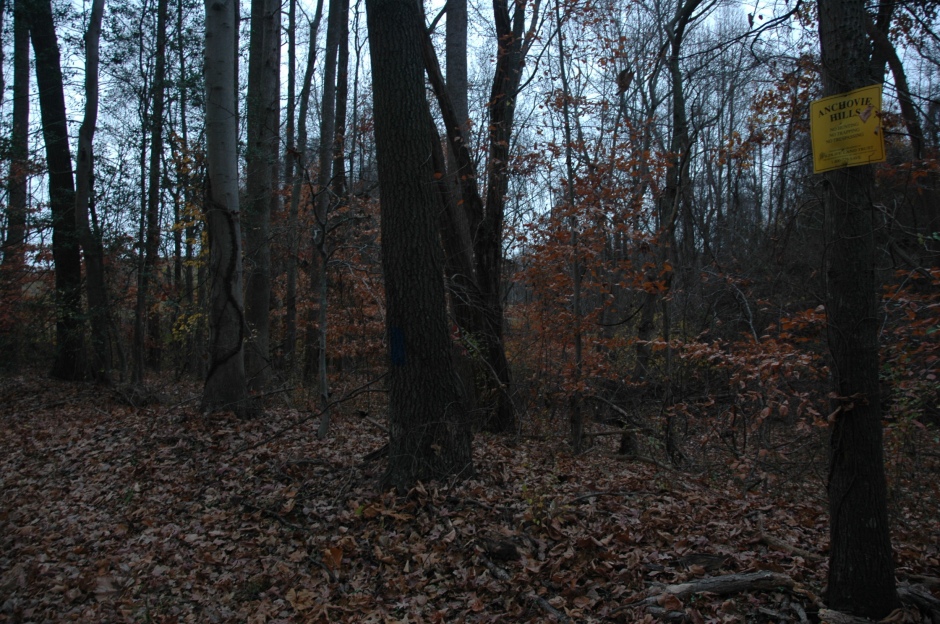 At the end of the road, you’ll arrive at signs for Patuxent River Park, and a gate across the road directly in front of you–probably closed. If you turn right, you’ll reach the small park and boat ramp; but if you walk past the closed gate toward the river you’ll reach the site of the last Magruder warehouse on the site. 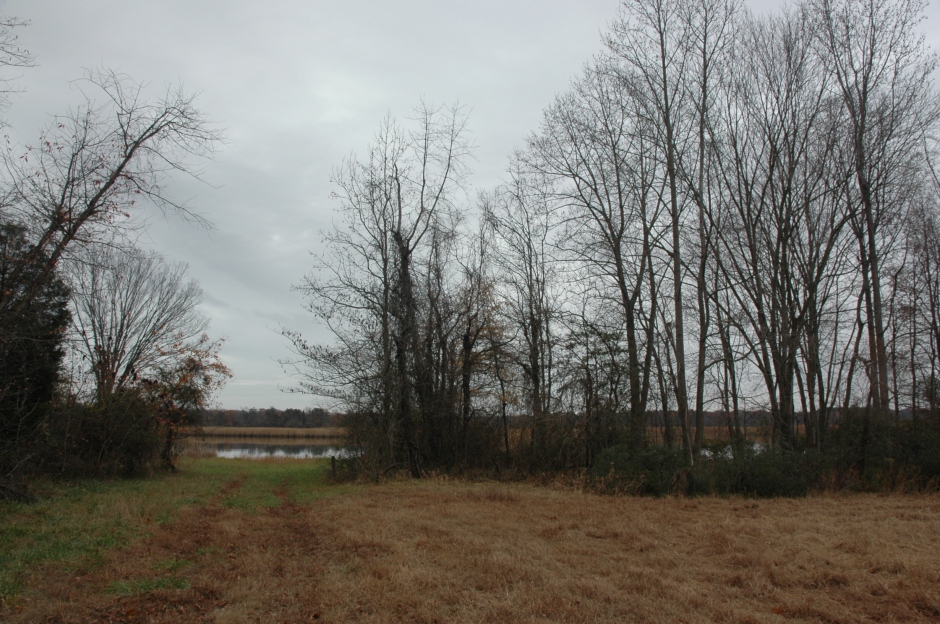 In 1661, Alexander Magruder acquired a tobacco landing–that is, a warehouse and shipping point for the export of tobacco.  This stretch of the Patuxent River was a half mile wide in those days, deep enough for ocean-going ships to anchor in the channel. From there, traders sent small boats to the various landings along the river bank–Magruder’s, White’s, and Milltown landings are names that survive onto modern maps. 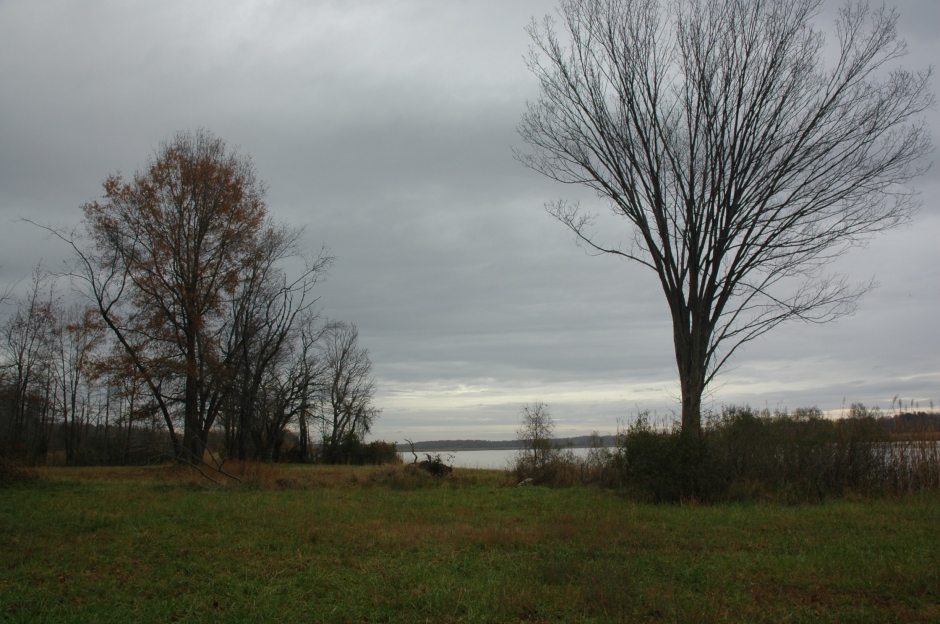 So, what makes the landings important? After all, Alexander also planted and sold tobacco, along with most of his neighbors; so what’s the big deal about the landing? The answer is: reliable income. Tobacco was early Maryland’s only significant export crop–in fact, it served as the colony’s currency, with prices for labor and goods recorded in pounds of tobacco. The price of tobacco was notoriously unstable, causing multiple problems for the economy. Yet in good times or bad the planters had to ship it out, and those who owned landings profited. Alexander already owned several tracts of land before he acquired the landing–it certainly wasn’t his only asset–but its reliable income undoubtedly contributed to his wealth.

In the 1980s, historian Russell Menard studied the wills and estates of 56 Maryland men of Alexander’s generation who arrived in Maryland after 1650 as indentured servants, and later obtained their freedom. About 75% of them acquired land, with most holding 50-400 acres. Only three of the 56–including Alexander Magruder–owned more than 1000 acres when they died.

Where, exactly, was the original landing? Hard to say. Magruder’s Ferry Road–in its lower stretch just a track through the trees and fields–bends upstream along the river bank for a ways, leading into a larger segment of the Patuxent River Park just north of where these photos were taken. Was the original site here, where the last warehouse stood? Was it somewhere else along that road? Was it just to the south, at the present boat ramp? If anyone knows, please get in touch!

This ruined pier is of 19th c. vintage… 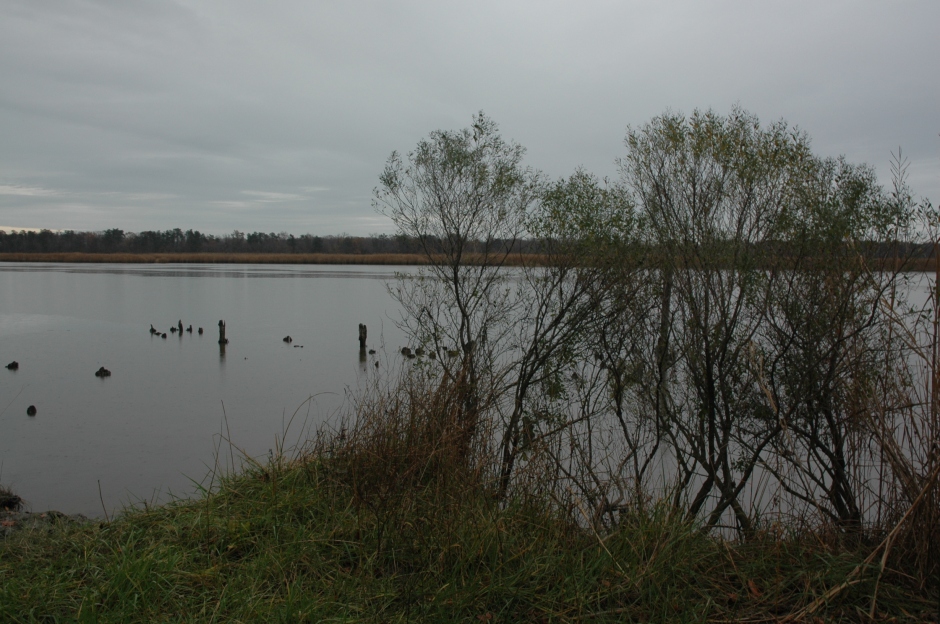 Now, walk back past the gate and take the side turning toward the boat ramp. When I last visited, this was still called “Magruder’s Ferry,” but new signs have dropped the name, identifying it only as part of the Patuxent River Park. Nice place for a picnic, if it weren’t November. (Seems it’s always November when I visit.) Note the tobacco barn. This shot looks back from the parking area toward the entrance. 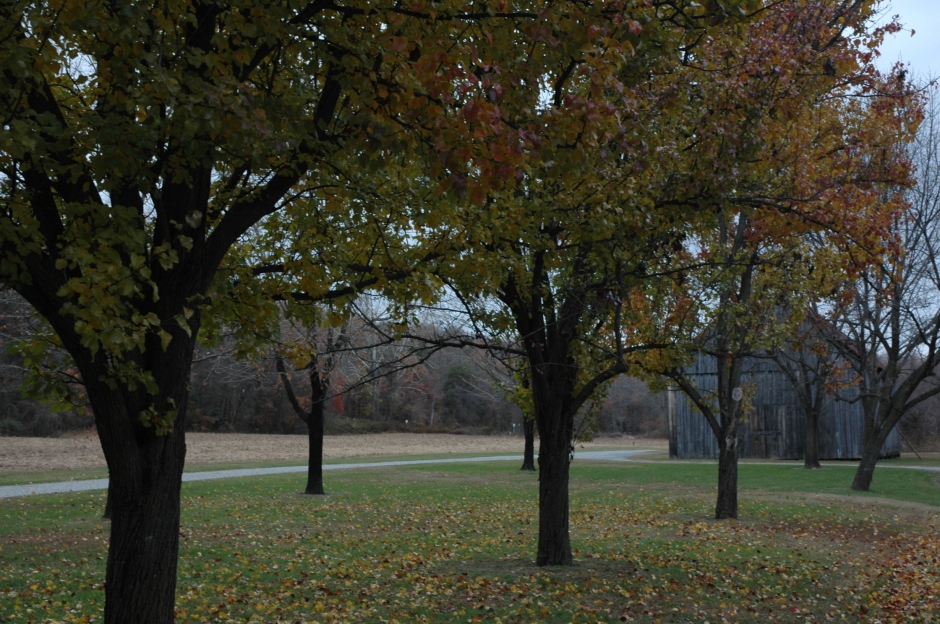 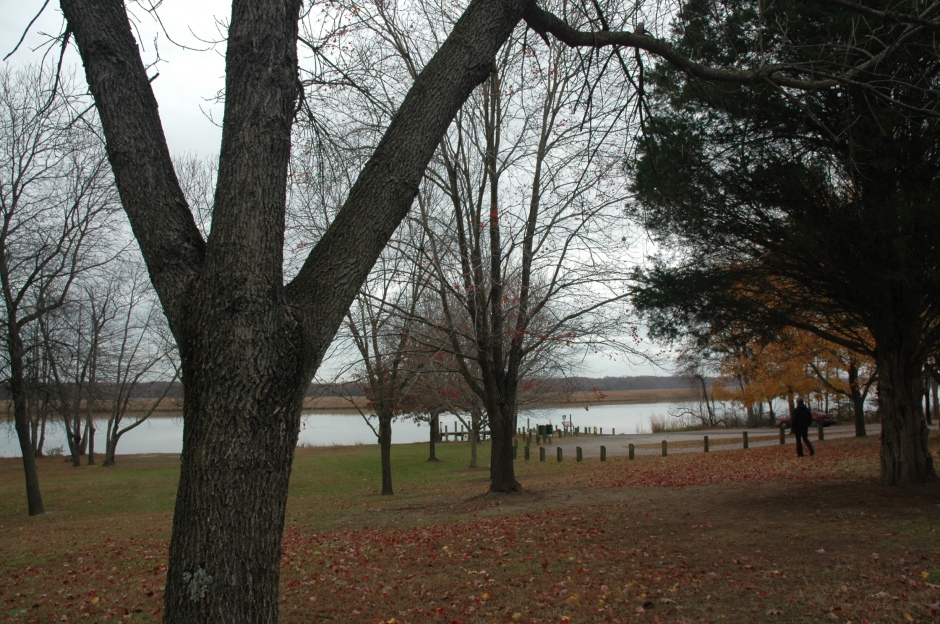 Yep, that’s me. And here I am again, on the pier. The warehouse site is to my left, slightly upstream.

And here’s me pinpointing Anchovie Hills and the site of the warehouse, on a map showing early plantations in Prince George’s County. 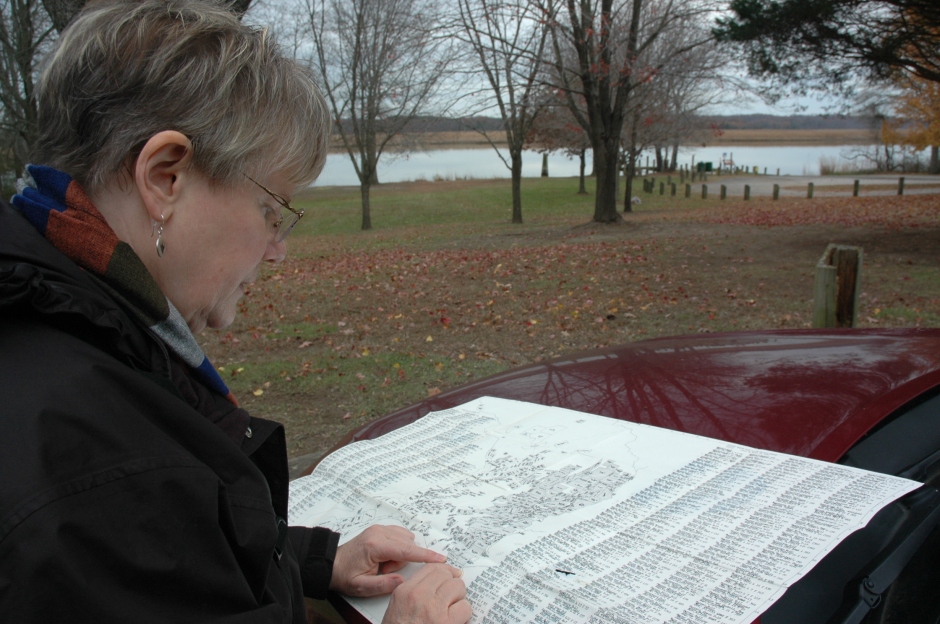 During preparation for the 2014 bicentennial of the British invasion of Maryland, the burning of Washington, and the shelling of Baltimore–during which Francis Scott Key composed the words of The Star Spangled Banner–the state of Maryland revamped its presentation of the Magruder’s Landing/Magruder’s Ferry site. At the boat ramp we found this new sign, commemorating the burning of the Moil and Magruder warehouse at the old landing site, in June 1814. Seems it made the papers in New York! (If you have trouble reading the sign in the photo, you can find the whole text at the Historical Marker Database. Or learn more about the War of 1812 in Maryland via the Star-Spangled Banner National Historic Trail. 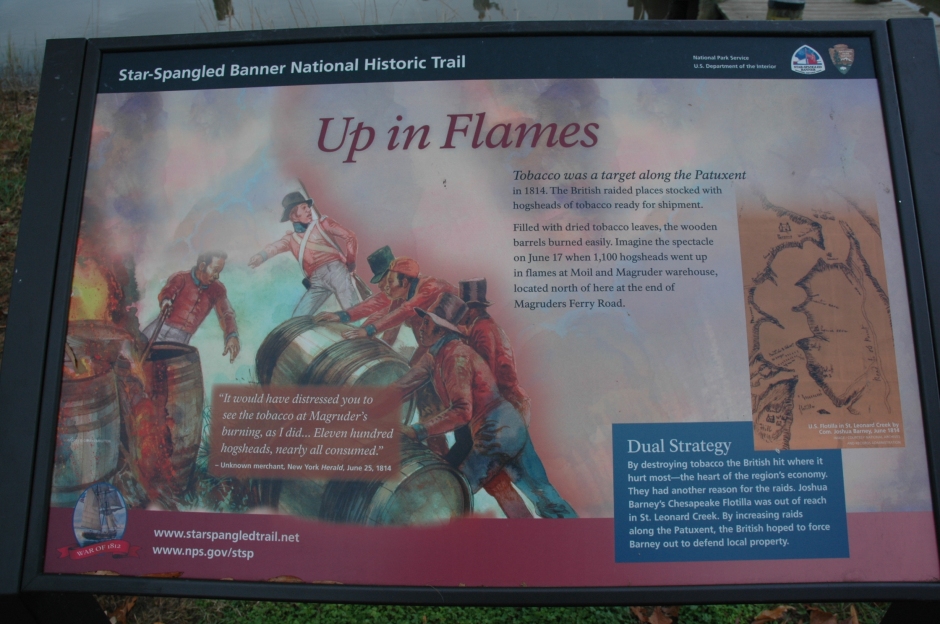 And then we just hung out and enjoyed the view. 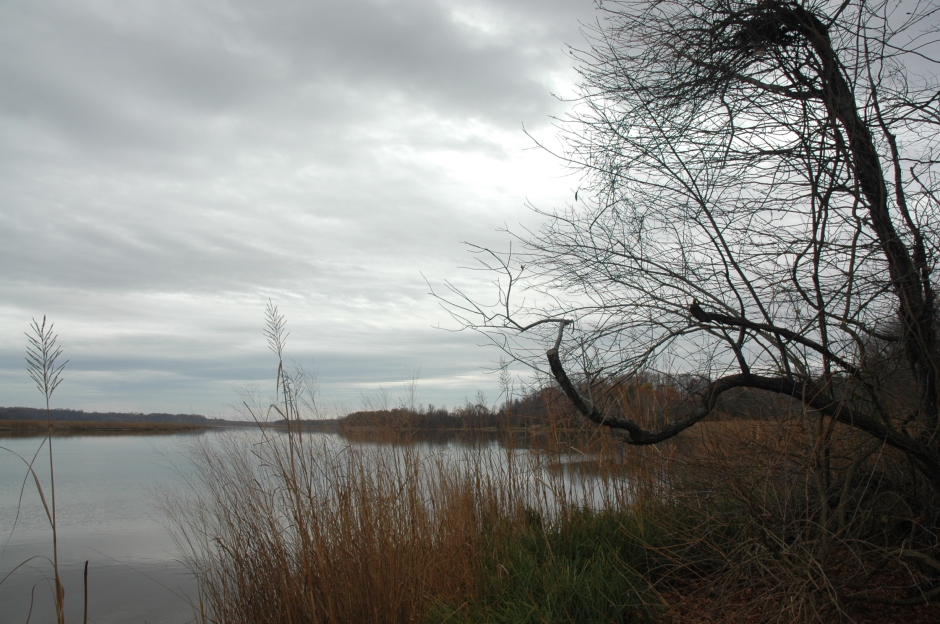 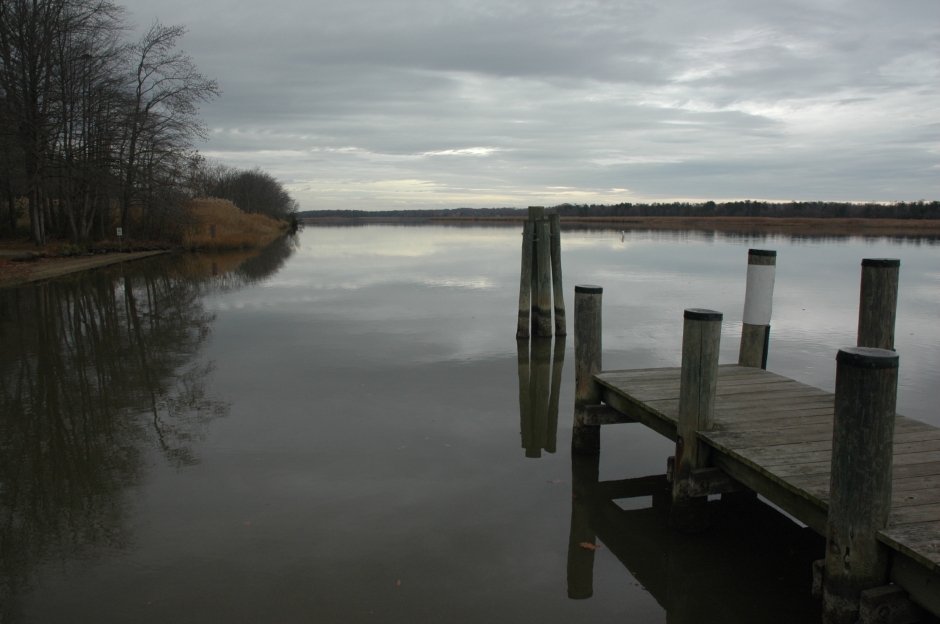 Looking upstream from the boat ramp, toward the site of the Magruder warehouse.
Photo: Margaret Yocom, 2013.